On International Women’s Day, young women set great example for all of us 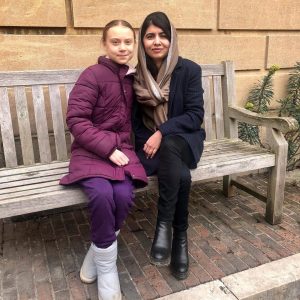 As the mother of young kids I sometimes wonder who’s teaching who – because I learn as much from them as they do from me.

It’s a good reminder that it doesn’t always take time, experience or maturity to be able to offer wisdom in the world. On this International Women’s Day, just look at the impact some of today’s young women and teens are having on our world.

Greta Thunberg is a great example. This Swedish 17-year-old brought immense attention to the issue of climate change this past year. Her international campaign worked to raise awareness and push political leaders to make the changes necessary to save the planet. She was named Time Magazine’s Person of the Year because of her work.

Then there’s Malala Yousafzi. In my house, we recently read the book “I am Malala: My Story of Standing Up for Girl’s Rights,” which details the experiences of this impressive young woman.

Malala, a Pakistani girl, was shot and critically wounded for her activism while a teenager. She survived to become a human rights advocate. Now 22, she promotes education for girls. In 2014 she was co-recipient of the Nobel Peace Prize, among other achievements, because of her work.

These modern-day young women bring to mind a teen girl from another era. Anne Frank continues to teach us today through the diary she kept of her experiences as a Jew hiding from the Nazis in World War II Holland, before dying in a concentration camp in Germany.

This year’s International Women’s Day’s theme is Each for Equal. The website proclaims, “An equal world is an enabled world. How will you help forge a gender equal world?
Celebrate women’s achievement. Raise awareness against bias. Take action for equality.”

If our future is in the hands of young people, including young women like Malala Yousafzi and Greta Thunberg, I’m excited about the changes they’ll bring. And I’m willing to learn from their examples and do my part.