I may have been the most popular girl in town the other Friday night. It was a sticky 96 degrees, and I was standing downtown handing out free jars of ice-cold lemonade. No, it wasn’t because I felt bad for those red and sweaty faces. It was to promote designated driving for MADD, Mothers Against Drunk Driving. That ice-cold lemonade was a strategy to wrangle in First Friday Art Walkers to my MADD Lemonade Stand.

I developed the idea for the Lemonade Stand, as a way to kick-off our PSA and social media campaign for MADD, emphasizing the tagline, “Be a Designated Driver. Good things happen.”

As people approached the stand, volunteers and I explained the social media campaign, which included a contest.

A person or group of people posed with a large MADD arrow, labeled #ImaDD, and pointed to the Designated Driver. Then they posted the photo to their Facebook or Twitter pages using the hashtag, #ImaDD. By posting their photo – and pledging to be DD – they were entered into a contest to win a prize package of gift cards donated from supporting downtown businesses. 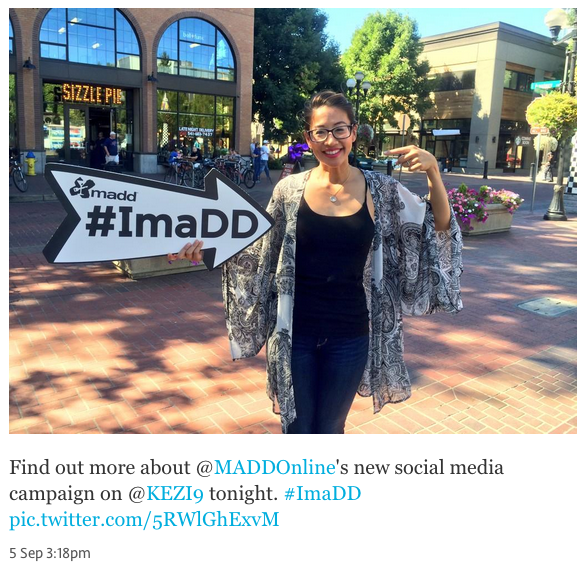 Mixing social media with face-to-face grass-roots outreach was a great way to create lasting impressions on a local and personal level. All while encouraging people to plan ahead and designate a driver – or be one!