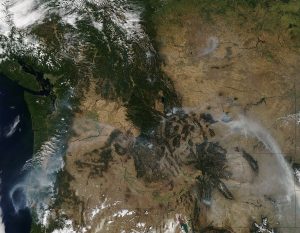 With the recent burning ban in effect throughout Lane County and last weekend’s 75-acre Dowens Fire near Cottage Grove, it’s clear that the time to talk about wildfire safety is right now.

Though, for Oregonians who suffered through two years of late-summer smoky, dangerously poor-quality air, it may always seem like a good time to focus on the issue. What can we do to prevent the fires that have the potential to burn out of control, destroying our beautiful scenic areas and impacting our economy?

While public officials work out the details on wildfire suppression and prevention policy, we can follow burn advisories and campfire rules (http://bit.ly/2VFT0Oz). We also can do quite a bit to add fire resiliency to our own homes and landscapes.

An OregonLive/The Oregonian story published last month reported the National Interagency Fire Center’s predictions. It read, “spring and summer will be warmer and drier than average in the Pacific Northwest, particularly west of the Cascades, and that means greater potential for wildfires.”

Among our favorite tidbits offered in that story, aimed at homeowners, http://bit.ly/2JE9Upo, is the reminder that our own Oregon Garden in Silverton has a fire safety house.

This life-size house demonstrates what people can do at home to add fire resiliency. This includes through planting, spacing and maintaining the landscaping. The house breaks yard design into three zones. Those are: Keep it Lean, Clean and Green; The Fire Break; and The First Line of Defense. The demonstration and related materials also address the house itself. This includes walls, roofs, doors, windows, vents, and maintenance. Upgrading and maintaining with an eye toward fire resilience can make a real difference:  http://bit.ly/2WJfXg8

For those interested in more context and facts, the Oregon Forest Resources Institute published a report in early 2018. It covers 2017, one of the worst fire seasons on record. Wildfires burned 665,000 acres of forests that year. Impact to Oregonians detailed in the report include health issues from particulates in the air. Sporting events were canceled. Oregon also experienced losses in tourism, agriculture and transportation: http://bit.ly/2HsjMQB

It’s impossible to predict how much wildfire Oregon will experience in 2019. We think knowing what we can do to lessen its effects at home and while enjoying the great outdoors could be helpful to all of us!